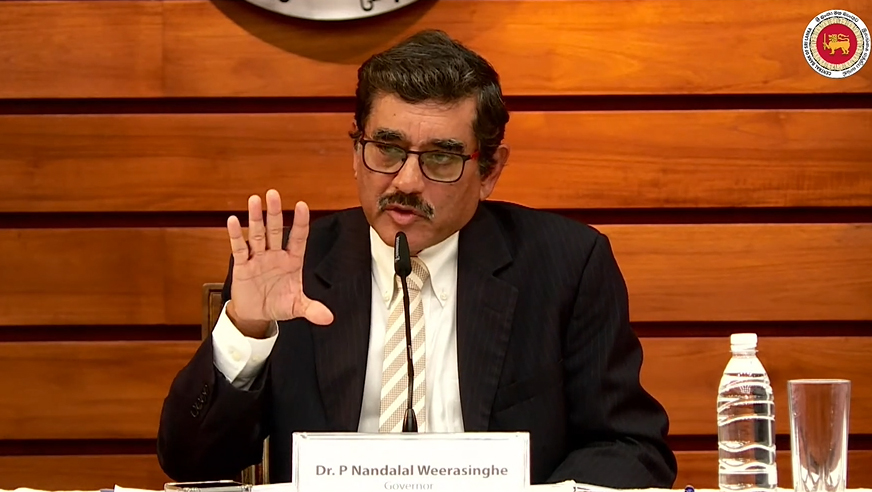 Sri Lanka in April 2022 did not include domestic debt when the country defaulted after the biggest currency crisis in the history of the central bank and two years of liquidity injections to suppress interest rates led to a loss of all its foreign reserves and also borrowed reserves.

Last week, Sri Lanka struck a staff-level agreement with the IMF involving macro-economic adjustments that will raise tax revenues, and temporarily reduce monetary instability until the next crisis under an intermediate monetary regime and structural adjustments.

“When we announced the debt standstill we clearly announced that our intention was to restructure external debt because this was a balance of payments crisis,” Governor Weerasinghe told a talk show hosted by Sri Lanka’s Newsfirst television.

“That was the position the government took in April. Going forward, because we have started with the IMF staff-level agreement, and formally started the debt re-structuring process we cannot talk about it.

“It is called radio silence. That means authorities should not talk about debt restructuring parameters whether it will be re-structured or not. Unfortunately, that is market sensitive. I cannot comment on that process.”

It is not clear yet what the IMF debt parameter is. According to information now in the public domain, the People’s Bank of China swap and the Bangladesh swap were included in an IMF debt sustainability analysis parameter.

Sri Lanka was not allowed to bust up the China swap on unsustainable imports and the money still remains in the reserves.

Uncertainty over whether or not the domestic debt will be re-structured forcing a second haircut on top of depreciation and inflation has discouraged investment flows into the domestic bond market, potentially exposing a serious flaw in the current permutation of a debt resolution plan developed more or less by the US Treasury, the IMF, the Fed and Washington-based think tanks, analysts say.

The debt restructuring plans were developed in Washington in response to a series of sovereign defaults in the 1980s in Latin American countries with sterilizing (soft-pegged) central banks which try to run ‘counter-cyclical policy’ with the tightening cycles of the US Fed which are pro-cyclical domestically.

In the process, Argentina-style Latin American central banks with so-called soft-pegs extend the credit cycle and resist rate hikes by printing money to maintain a policy rate followed by sterilizing interventions with new liquidity which then leads to loss of reserves, a collapse of the peg and default.

Several plans have been cooked up in Washington including the ‘Baker Plan’ named after then US Treasury Secretary James Baker, which is partly responsible for the ‘structural benchmarks’ in current IMF programs.

Other Latin American debt resolution experiments include Brady bonds, named after US Treasury Secretary Nicholas Brady where bank loans were swapped for bonds along with early permutations of what is now known as a hair-cut.

The principle was guaranteed by deep discount 30-year US ‘Brady bonds’ bought from bailout funds or remaining reserves.

The plans did not contain any serious attempts to restrain the flexible policies of the intermediate regime central banks which led to forex shortages, sterilized interventions, and default even when countries ran budget surpluses such as in the case of Mexico.

Sri Lanka’s interest rates are now around 30 percent, partly due to the lost credibility of the peg which has not yet been restored – which is usually done through a float as a prior action in an IMF deal, and also due to the lack of early clarity on the treatment of rupee bonds, which has created uncertainty.

Re-structuring of domestic debt leads to an effective default ending the ‘gilt’ status of government bonds.

Fitch Ratings has said there was a high risk of default on local currency debt at its CCC rating.

Large volumes of which were bought by the central bank to trigger the currency crisis and the rest is held by the Employees Provident Funds and commercial banks, insurance funds and private holders.

Sri Lanka authorities have said hair cuts on domestic bonds will lead to problems in banks which will delay recovery and the ability to repay foreign bondholders.

Sri Lanka banks have taken mark-to-market hits on their equity directly and are anyway facing higher rates on deposits. They also have to provide for dollar bonds in their portfolios.

Rupee bond holders anyway take a real ‘haircut’, with the depreciation and domestic inflation which tends to inflate the economy and bring higher nominal tax revenues, while the real value of the debt is ‘hair-cut’ or inflated away.

In the current debt restructuring, various creditors are treated unequally. The debt of IMF, World Bank, ADB and AIIB are not restructured. Bi-lateral debt is re-structured and haircuts are given for private bonds which are sometimes bought at steep discounts in the secondary market.

The current uncertainty came after President Ranil Wickremesinghe remarked that Sri Lanka’s debt advisors were looking at a possible restructuring of domestic debt as part of their scenario analysis of debt sustainability. (Colombo/Sept07/2022)