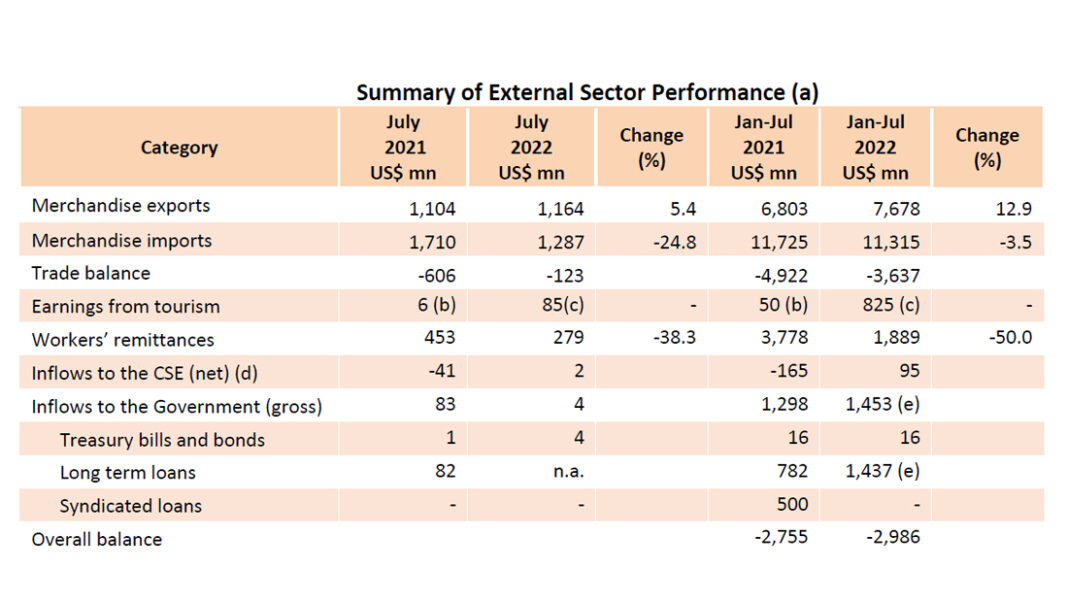 ECONOMYNEXT – Sri Lanka’s monthly imports fell to an 11-year low to 1,287 million US dollars in July 2022, the lowest since 1,236 million US dollars recorded in February 2011 as interest rates went up, credit slowed, and financial account inflows dried up.

Sri Lanka has high levels of imports and a trade deficit mostly due to inflows from government borrowings and in times of crisis when the central bank prints money (sterilizes interventions) after using reserves for imports.

In Sri Lanka, there is a strong belief that foreign reserves can be used for imports so that mainly the private sector can ‘live beyond its means’ on the reserves, with credit driven by sterilized interventions.

Importing fuel on credit is another method used by policymakers and mercantilists to boost imports and widen the current account deficit (a type of so-called ‘bridging finance’, another living beyond the means tactic) after money printing creates forex shortages.

Sri Lanka defaulted on its debt in April 2022 and is now set to negotiate with creditors.

Sri Lanka’s banks are also repaying delayed payments. Meanwhile, the government has also repaid dollar bonds in rupees. The central bank has said that the negative net open positions of banks are reducing.

Sri Lanka’s central bank has allowed rates to go up and the economic activity has been smashed to resurrect a soft-peg (flexible exchange rate), which lost credibility and collapsed after two years of money printing and surrender requirement.

Though credit has reduced, there was still a balance of payment deficit in July with the central bank borrowing money from India under the ACU facility and printing money to offset interventions. (Colombo/Sept06/2022)