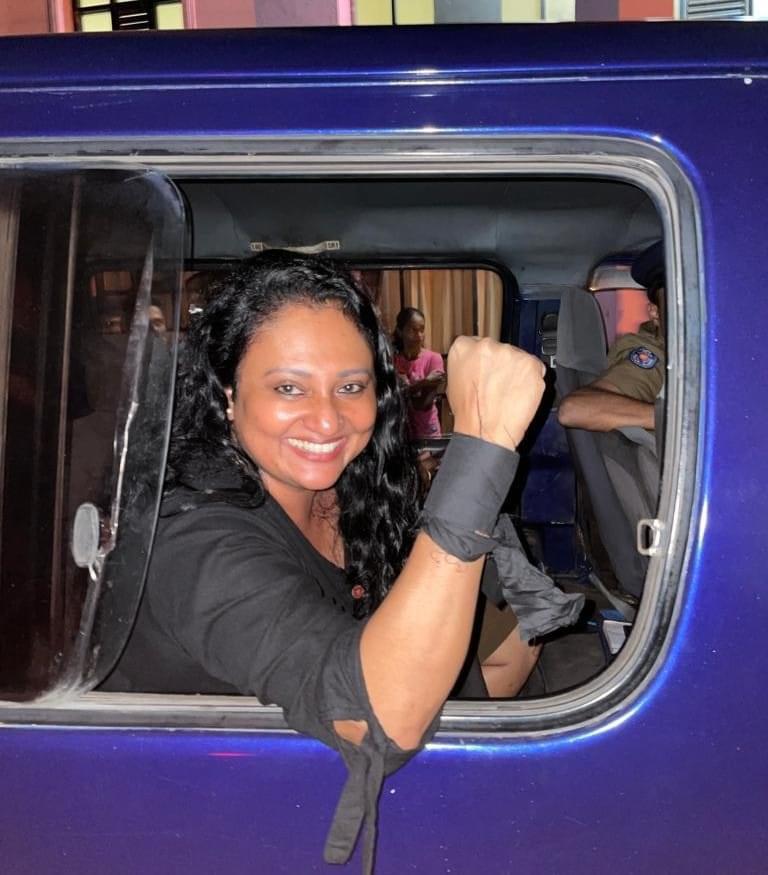 ECONOMYNEXT – A populour Sri Lankan protest leader and actress was arrested on Wednesday for an offence which police alleged her to have committed on July 10 on citing she forcibly entered the Presidential Secretariat.

The arrest, however, came following Damitha Aberyratne spoke against President Ranil Wickremesinghe and his government for not addressing the plight of people who have been suffering of high cost of living.

“People in the country can’t afford goods any longer. Mothers don’t have money to give milk to their children,” she told media at the protest site near parliament where most of the protesters who forced the resignation of former president and prime minister told reporters.

“These people (leaders) don’t understand the plight of the people because they aren’t with the people, so obviously our struggles and difficulties are gone unseen.”

“Our politicians are here to maintain the power, protect their sons and maintain political ties but that’s all they do. People have come forgetting color, race and party and if they don’t stand up on behalf of the country.

“Don’t be blinded or stay quiet, come out and voice out your difficulties, otherwise we will never be understood. They thought the struggle was over but its not like that, we are here because the struggle is not over.”

According to Sri Lanka’s Police Media Division, the actress was arrested at 7.00 pm by the Colombo Crimes Division and further investigations will be undertaken by the Fort Police.

During the protest Abeyratne told the media,

Abeyratne urged the people to voice out their agitations and frustrations instead of remaining quiet and said that, “If we forget about the aragalaya (struggle ), these politicians will continue to sit in power.”

Sri Lanka is presently facing its worst economic breakout, which is witnessed through galloping inflation accelerated by continuous money printing, as the prices tended to steepen,

Sri Lankans brought themselves to the street demanding the resignation of former leader President Gotabaya Rajapaksa.

Already, Sri Lanka is widely criticized for its human rights violation by suppressing the dissent voices. Protesters have demanded to release three key protest leaders who are detained under the prevention of terrorism act (PTA). (Colombo/Sept07/2022)