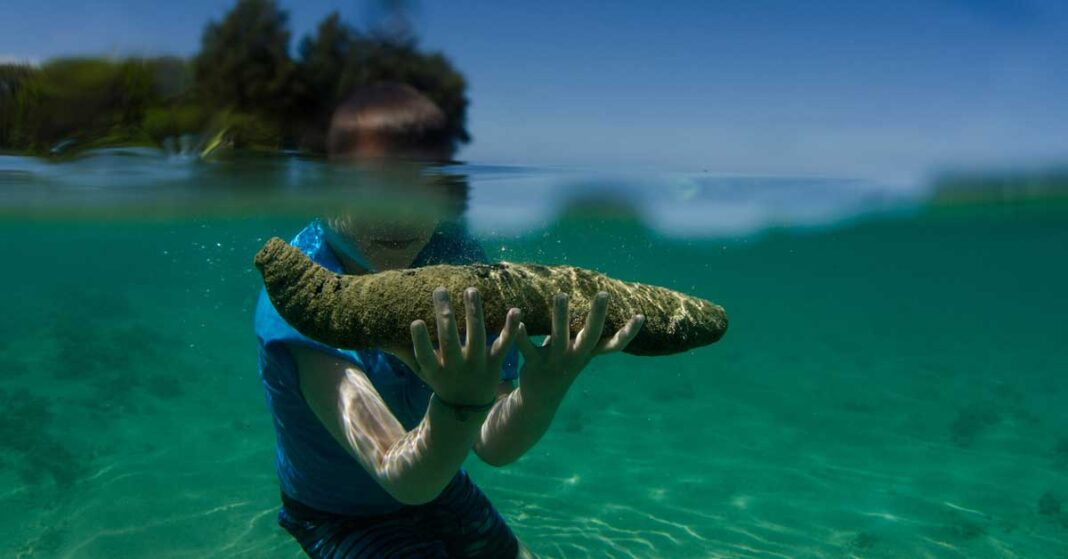 The National Aquaculture Development Authority (NAQDA) has implemented a five-year project to develop the commercial cultivation of sea cucumber in Sri Lanka. This project, which aims to increase the foreign exchange earnings of the country and enhance the livelihood of the fisheries community, involves the establishment of sea leech breeding centres, expanding sea leech farms, and establishing sea leech export production villages.

For the furtherance of this project, on Monday (20), the Cabinet of Ministers approved a proposal presented by Minister of Fisheries Douglas Devananda to identify 5,000 acres in Jaffna, Mannar, Kilinochchi, and Batticaloa districts in order to establish 100 acre sea cucumber production and exporting villages and create one acre sea cucumber cultivation farms for each 100 acre land.

Speaking to The Sunday Morning Business, NAQDA Assistant Director (Coastal-Northern Province) Nirooparaj Balachandran stated that the five-year project implemented by the Government to develop the commercial cultivation of sea cucumber, sought to expand the area used for cultivation of sea cucumber from its current 600 acres to around 5,000 acres. Currently, the NAQDA, together with the National Aquatic Resources Research and Development Agency (NARA) and several local and foreign universities are carrying out the necessary research for the implementation of this project.

“This project consists of two main components – hatchery development and farm development. We will simultaneously develop hatcheries and farms for the commercial rearing of sea cucumber. Currently there are only three hatcheries functioning in the country – two private hatcheries and one Government hatchery. We are looking to commence the operation of three more hatcheries by the end of this year,” he stated.

Speaking to The Sunday Morning Business, NAQDA Director General J.M. Asoka stated that the local sea cucumber industry was largely limited to the fishing of wild sea cucumber to be exported instead of commercial cultivation.

Explaining further, she stated: “Due to the environmental impact of such continuous fishing of wild sea cucumber, the Government has decided to focus on developing the cultivation of sea cucumber through aquaculture. Therefore, by promoting aquaculture farming of sea cucumber, we can reduce the depletion of the wild population.”

Evidently, the recent decision by the Cabinet of Ministers is a significant step in the right direction because the lucrative export value of these marine invertebrates has resulted in the over-exploitation of Sri Lankan wild sea cucumber stocks. As a result, the sea cucumber species available in Sri Lanka’s territorial seas has shrunk exponentially over the past few decades. This is reflected by a study carried out in 2010 by D.C.T. Dissanayake and Sujeewa Athukorala, which identified 24 species of sea cucumber in commercial catches. However, a similar study conducted in 2019 by Ganeshan Nishanthan, Ajith Kumara, Pahan Prasada, and Chamari Dissanayake revealed that only nine species of sea cucumber were found in commercial catches from November 2015 to January 2017 in Sri Lanka.

Speaking to The Sunday Morning Business, an insider in the Sri Lankan sea cucumber export industry stated that over-exploitation by fishermen and climate change had adversely affected the wild sea cucumber population in Sri Lankan waters, and that this was one of the primary motivations behind the Government’s push to develop sea cucumber cultivation through aquaculture.

“Lack of control and monitoring of sea cucumber fishing has resulted in the significant depletion of the wild sea cucumber population. While authorities have imposed restrictions on wild fishing, such restrictions are largely ignored by our fishermen due to the lucrative nature of the product. Therefore, they catch even small sea cucumber below the Government restriction of 80 g and they also fish during the breeding season. As a result, the wild population has decreased significantly over the past decade. Furthermore, climate change has negatively impacted our wild populations – their breeding habits are linked to the climate, so when there is a change in the climate their breeding is disrupted or the subsequent nursing process is disrupted.”

Characteristics of the industry

Fishing and export of sea cucumber, also known as sea leeches, sea slugs, or bêche-de-mer in East Asia, has a long history in Sri Lanka since its introduction by the Chinese. According to Hornell (1917), sea cucumber was one of the commodities exported to China during the past 1,000 years following the rise of trade between South India, Sri Lanka, and China. Despite this long history, sea cucumber is not part of Sri Lanka’s cuisine and the totality of the volume caught is exported.

The Sri Lankan sea cucumber was primarily artisanal and was modelled in such a fashion to contribute to the livelihoods of fishermen in the coastal region. However, over the past few years, attention towards the industry has increased significantly due to increased demand in the international market and the attractive prices quoted. Consequently, this previously unimportant and unregulated fisheries industry has transformed into a commercially important one, involving significant economic benefits and potential.

According to Balachandran, the local sea cucumber is largely limited to the Jaffna, Kilinochchi, and Mannar areas.

“There are over 20 species of sea cucumber in Sri Lanka, among which Holothuria scabra is commercially cultivated in farms while the rest are obtained from the wild. Therefore, currently only a small portion of the exported sea cucumber is being cultivated through aquaculture and wild cucumber continues to be the main source,” he noted.

When considering wild sea cucumber fishing, the most popular method is diving, which includes scuba and breath-holding. The next method is gleaning, which is predominantly carried out by fisherwomen, where they fish during the low tide by walking from shore to shallow waters. The third method is netting, where around 28 encircling nets are used to catch the sea cucumber. They fix the net against the water current in the evening and haul it back the next morning.

There are increasing concerns that due to the ban in India on sea cucumber fishing, Indian fishermen have started smuggling their sea cucumber harvests to Sri Lanka for the purpose of utilising Sri Lanka’s legal sea cucumber trade to launder Indian sea cucumber. This is reflected by the fact that the Sri Lankan Navy has seized 16,576 kg (36,544 lb) of dried sea cucumber and 11,840 kg (26,103 lb) of wet sea cucumber smuggled from India during the period 2015 to 2021.

Responding to these concerns, Balachandran stated that while there was a practice of smuggling Indian sea cucumber to Sri Lanka for the purpose of re-exporting, policing it after it entered the country was near impossible since authorities could not discern between Sri Lankan and Indian sea cucumber harvests.

According to Asoka, in 2021 Sri Lanka exported 336 MT of sea cucumber from which only around 20 MT was derived from aquaculture.

Currently, the main export markets for Sri Lankan sea cucumber are Singapore, Hong Kong, and China. Sri Lanka’s export of sea cucumber reached a peak of 503 MT in 2019, generating Rs. 2.3 billion in revenue. This represents an exponential increase when compared to the 87 MT exported in 2000, generating a mere Rs. 143 million.

The current Government’s emphasis on the development of the sea cucumber aquaculture industry would help create a sustainable foreign exchange-generating industry for Sri Lanka. Sea cucumber is in high demand in East Asia and involves very attractive prices.

According to Mongabay, “Some species, like the sandfish (Holothuria scabra), sell for around $ 1,800 per kg ($ 816 per lb) while the white teatfish (Holothuria fuscogilva) fetches about $ 401 per kg ($ 182 per lb) due to the high demand, making sea cucumber harvesting a lucrative business.”

He further stated that the NAQDA had called for an Expression of Interest (EOI) for any foreign entity interested in bringing new technology together with foreign investment to the sea cucumber industry of Sri Lanka.