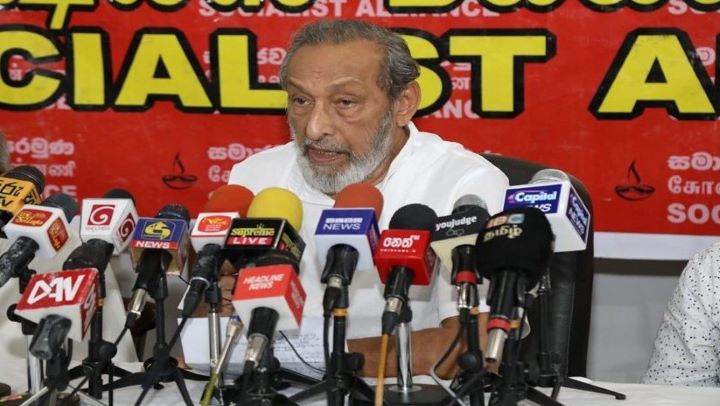 Former Minister and now independent MP Vasudeva Nanayakkara claimed on Friday June 24 that the IMF represents US interests and it was the organisation’s interventions in Ukraine that led to Russia’s invasion of that country.

“The IMF is the tail of US foreign foreign policy. That is the truth. There is a war in Ukraine today after the IMF intervened there.

“Who pressured them to join NATO? The IMF. That’s why there is a disastrous war there today. That’s the doing of the IMF,” said Nanayakkara speaking to reporters at a press conference.

There is no evidence yet that the IMF had any role to play in the chain of events that led to Russian President Vladimir Putin’s decision to invade Ukraine.

Despite the MP’s misgivings about the IMF’s alleged geopolitical adventurism, he is in favour of the organisation helping Sri Lanka restructure its colossal external debt, which has now bankrupted the island nation and pushed its people to desperation after years of economic mismanagement.

“We can’t pay more debt. We have asked the IMF to restructure existing debt. That’s what the IMF must be requested to do. While the IMF is looking after the debt, we can purchase oil from Russia,” said Nanayakkkara.

However, in November 2021, when he was still with the government of President Gotabaya Rajapaksa, Nanyakkara was adamant that Sri Lanka will never approach the IMF for assistance.

“We won’t go to the IMF even if we die,” he famously declared in parliament that month.

Much has happened since then and Sri Lanka is now going through the worst forex crisis in its history, with the country struggling to pay for essential imports including fuel, food and medicine. An IMF team is already in the island for preliminary discussions, and according to Prime Minister Ranil Wickremesinghe, the government aims to reach a staff-level agreement with the organisation and also have a framework in place for debt restructuring by the end of July.

The group of former government MPs that Nanayakkara represents have questioned an apparent reluctance on the part of the Sri Lankan government to reach out to Russia for help. Nanayakkara was present at a discussion the group had with the Russian ambassador to Sri Lanka on Tuesday June 21.

MP Wimal Weerawansa, the de facto leader of the group, told parliament on Wednesday June 22 that Sri Lanka must not overlook “traditional ally” Russia in its efforts to overcome a worsening economic crisis, particularly with regard to ongoing IMF negotiations.

Sri Lanka must not overlook Russia in favour of IMF, says MP Weerawansa

Sri Lanka is in the throes of a fuel crisis triggered by the forex shortages, and Weerawansa, Nanayakkara et al have been pressuring the government to reach out to Russia. Nanayakkara said at Friday’s press conference that Sri Lanka must either negotiate a long term concessionary oil supply from the Middle East or look to Russia.

Weerawansa in his speech in parliament earlier had intimated that the reason Sri Lanka was not talking to Russia was due to pressure from the West. Echoing this, Nanayakkara said: “There is no conflict there [in buying oil from Russia while talking to the IMF]. What is the conflict?  We tel l the IMF to look after our debt, and we buy oil, gas and fertilizer from Russia. There is no conflict there.”

He claimed the real reason was that the IMF was an extension of US foreign policy.

The government has yet to respond to the claims. (Colombo/Jun24/2022)