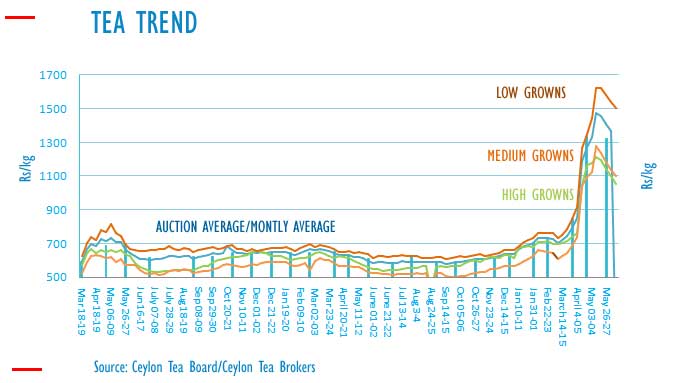 In the last week of May low growns averaged 3.43 dollars a kilogram up from 2.43 a year earlier. Global commodity prices have moved up due to US money printing, which tends to weaken the dollar.

In Sri Lanka Mercantilists and soft-peggers usually claim that inflation comes from imported prices. However, prices of all traded goods, whether imported or exported go up when the central bank prints money to depreciate the currency.

Global prices also go up in dollar terms (commodity booms) when the US Federal Reserve prints money. At the moment commodity prices are booming due to the so-called ‘Powell Bubble’ the worst since the Greenspan-Bernanke bubble which broke in 2008/2009.

In US dollar terms the national sale average on May 31 was 3.69 dollars a kilogram compared to 3.18 last year.

However, in dollar terms, it had shot up to 4.2 dollars per kilogram, up from 3.6 dollars in the June 01 sale.

OP and OPA Well-Well-made varieties were firm, whilst the balance and bottom were irregular.

Select best FBOP/FBOP1 were firm while others eased.

In the BOPF category, Best Westerns declined 50-70 rupees a kilogram while Below Bests were irregularly easier. others gained to a lesser extent.

This week, BOPF’s Select best and best gained whilst the poorer sorts were firm.

While the OP1’s Select best were dearer by 50 rupees per kg. Best & below best gained by 100 rupees per kg whilst the
poorer sorts were firm.

In the PEKOE/PEKOE1 PEKOE category, Select best along with the below best moved up by 50 rupees per kilogram.

High-grown BP1s were firm while PF1 moved up by 20-30 rupees per kilogram.

Mid grown BP1s were lower while PF1s were easier by 30-50 rupees per kilogram.