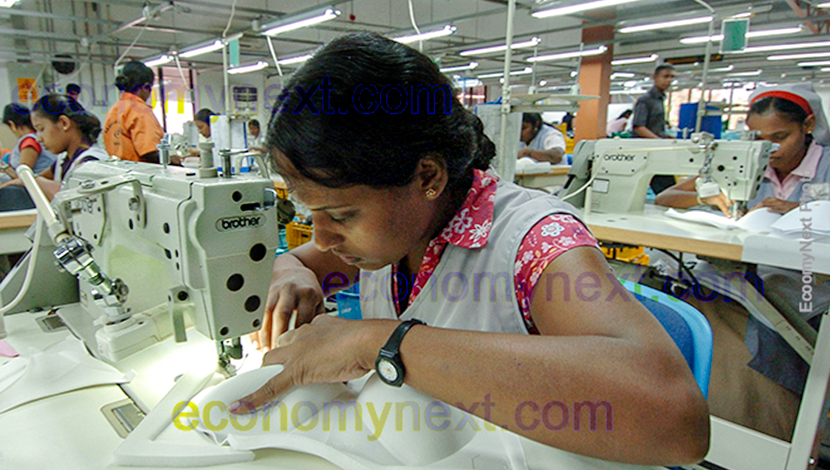 ECONOMYNEXT – Despite a full-order book at the moment, Sri Lanka’s apparel exporters feel their customers shifting their orders to de-risk from Sri Lanka’s ongoing crisis.

The five billion dollars industry, a top dollar earner of the country, so far has a full order book.

But for the second season (the industry runs on a six-months cycle) that is to begin in July, exporters are saying they are seeing signs of customers pulling out to be on the safer side.

“We are seeing a reduction on the horizon and that is not because of the sector’s ability to deliver to the customer but more because of the customer seeing the country as risk; so to de-risk what they have in Sri Lanka,” Yohan Lawrence, Secretary General of Joint Apparel Association Forum of Sri Lanka, said.

“Where they bought 100, they’ll buy 80. The impact will probably be seen in July/August.”

If the apparel customers of Sri Lanka start to cut down on orders now, the impact of that will be seen only in July or August when the new production season starts.

“We are seeing early signs of customers moving orders to other countries, mainly because they are worried about the country’s social stability,” Rehan Lakhany, former Chairman of Sri Lanka Apparel Exporter Association, said.

“Mainly with what they (customers) see on the news in foreign media, they are worried about whether we are able to operate our factories and if we can deliver goods on time to their stores.”

Customers are sending questionaries to exporters on a daily basis inquiring about the country’s situation.

“We need to show stability in our ports, transport sector, and diesel supply. Unless some concrete assurance is given to them, not just verbal [assurance, they will move orders],” said Lakhany.

He added that there’s unnecessary fear among buyers, but regardless, the country needs to show them that the banks are able to make payments on time and give assurance that operations are running as usual.

The main three factors worrying them now is the shortage of liquidity of dollars in the bank, Lakhany said.

“A lot of the banks don’t have dollars now. Even if we give them a 100 million from exports, they are not able to give us the same 100 million for the import of raw materials.

“We have taken orders, but banks are unable to make the payments. Banks are having liquidity issues in foreign currency.”

The second concern buyers have is the fuel shortage as generators must be run during power cuts and to transport employees.

The third concern is social stability of the country.

In the first four months of 2022, the industry has earned 1.8 billion dollars.

Hanging by a thread

The 30-year-old Sri Lanka’s apparel industry, once known for its quality and reliability has become a question mark among its customers as social instability and a severe dollar and fuel shortage continue to cripple the country.

Compared to regional competitors, Sri Lanka’s garment export size is very small but the quality of its products has made it a favorite among its dollar rich European and American buyers

The Export Development Board (EDB) specifically notes that the island’s fame in apparel is because of its “excellence in speedy delivery and reliability.”

The “Made in Sri Lanka” label is synonymous with quality, reliability, social and environmental accountability, EDB says.

But it all may come to an end as the country goes through its worst economic created by years of bad monetary practices funneled by money printing.

Lakhany says no matter how much they try to say that despite the challenges factories and businesses are operating, the customers are not ready accept it.

To aggravate the situation, Shanghai in China has opened up following a two-month strict COVID-19 lockdown.

This Lakhany sees as bad news for Sri Lankan businesses as now the customers have more options to make an easy shift. Shanghai is one of the world’s largest apparel and textile exporters.

Therefore losing even 20 percent of the orders or one month’s export (500 million dollar on average), the exporters say the impact will be multifold.

He fears that the factories might not be able to provide for the workers.

There are close to 800,000 workers relying on the industry.

On top of this, the manufacturers have difficulty in paying their suppliers who, after being delayed payments, have started to ask for those payments.

“One of our biggest suppliers has been outstanding for so long they want us to pay the supplier. But we can’t pay because the banks are not releasing funds,” Lakhany said.

“So there are multiple factors, and customers pulling out is the last nail on the coffin.”

“If they pull out without any ground and just out of fear, the impact that will be felt in the next four months will be unstoppable.”

The exporters say action must be taken now to mitigate the risks before it’s too late. (Colombo/Jun10/2022)