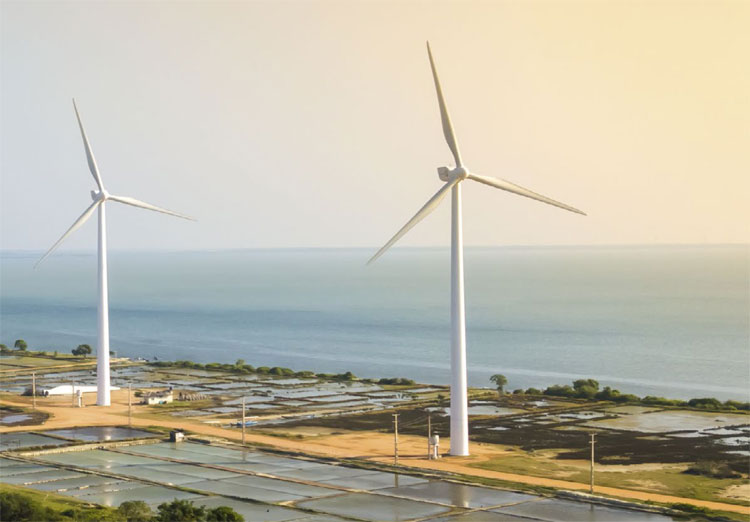 WindForce PLC, an independent power producer (IPP) of renewable energy in Sri Lanka, announced it was able to record a revenue of Rs. 4,393 million, contributing to a 2% year-on-year (YoY) growth despite significant economic headwinds.

The top-line achievement in FY 21/22 was amidst several operational disruptions such as a breakdown at the Ceylon Electricity Board’s (CEB) Norochcholai Wind Collector Substation which was subsequently rectified in September 2021, as well as decreased operational capacity in WindForce’s Joule and Beta power plants due to blade damages caused by lightning. With repairs being made to the damaged turbine blades, the company expects to run at full capacity in the current financial year.

WindForce stated it has continued in its efforts to successfully venture into new projects in FY 22/23 to support the company’s medium/long-term growth. At the end of 2022, WindForce is expected to add 25 megawatts (MW) of solar and wind power to the local grid, where operational earnings are expected to flow from the second quarter of FY 22/23 onwards.

Further, as with most companies, key policy changes implemented by authorities such as the sudden floatation of the Sri Lankan rupee in early March following a hard peg throughout, led to the company absorbing a significant exchange loss of Rs. 296 million on foreign currency loans in a single quarter, i.e. Q4 of FY 21/22.

However, it is important to note that all overseas project revenue is entirely foreign currency (FC) denominated, and all FC debt is backed by FC assets. In dollar terms, total FC assets stood at twice the total FC debt as of 31 March 2022, where FC assets are held at cost, and loans revalued quarterly.

On the international front, WindForce is looking to expand the Tororo solar plant in Uganda by 30vMW and is awaiting the generation license approval from the regulator in Uganda. Discussions are also currently underway with the utility in Senegal regarding the 30 MW solar + 7.5 MW battery energy storage system, to set a beneficial tariff rate.

Locally, the sector’s economic contribution is demanding change in overall industry dynamics, with a greater emphasis on the shift to renewable energy, and upward revisions in CEB tariff rates. As an IPP with a strong local presence and a foreign footprint, WindForce is well-positioned to capitalise on opportunities both locally and globally.

Renewable energy generation is known to be highly seasonal with Sri Lanka’s wind patterns varying throughout the course of the year. Therefore, as WindForce’s power generation is predominantly based on wind power, it is prudent to appraise the company’s financial performance in terms of gross profitability on an annual basis as opposed to a quarterly appraisal.

Pioneering wind power generation locally, WindForce will hold over 245 MW in their portfolio at the end of the current financial year, and was the first Sri Lankan company to set up solar power plants in Pakistan, Uganda, and Ukraine.