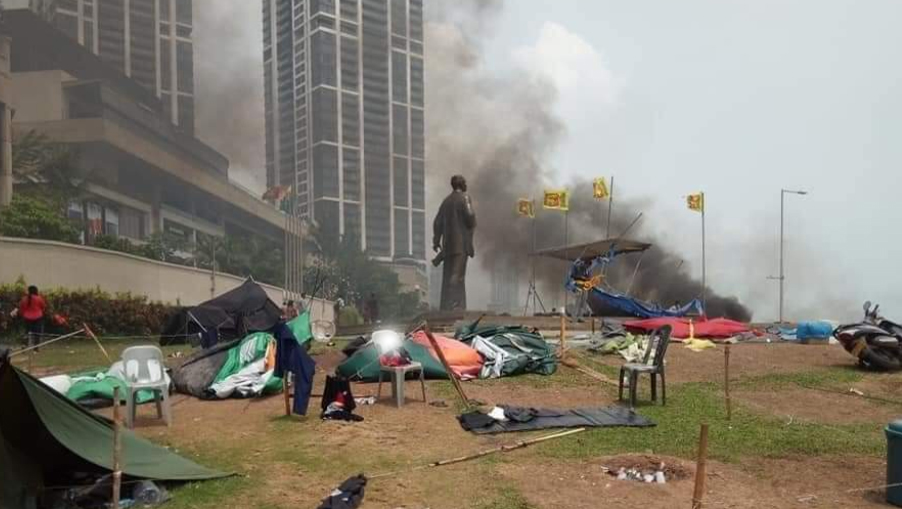 ECONOMYNEXT – An investigation into the May 9 mob violence at Galle Face has revealed new evidence on how Colombo’s police were totally unprepared despite repeated intelligence warnings of impending violence official sources said.

Intelligence services as well as the Special Branch of the police had warned that up to 6,000 supporters of the SLPP descending on Temple Trees were eventually planning to smash the #MainaGoGama and #GotaGoGama protest sites.

“Instructions were clear that there should be no march out of Temple Trees,” an official close to the investigation said. “But it is shocking that the Colombo DIG had not arranged any physical barriers to hold them back.”

The lax arrangements supervised by Senior DIG Deshabandu Thennakoon were in sharp contrast to the spiked-barricades the authorities put up in Colombo on April 24 to prevent the Inter University Students’ Federation marching to the President’s official residence.

What has also surprised the investigators is the failure on the part of Colombo Fort and Kollupitiya police to seek court orders to prevent SLPP supporters marching to the anti-government protest sites.

Instead of iron barricades, the police had a thin line of officers at Galle Face and that was easily breached and from that point Senior DIG Thennakoon was himself seen on TV footage marching with SLPP MP Sanath Nishantha who is a key suspect.

The magisterial investigation is to resume this week. (COLOMBO/May22/2022)