Is Carlos Alcaraz the next Rafael Nadal?  – The Morning 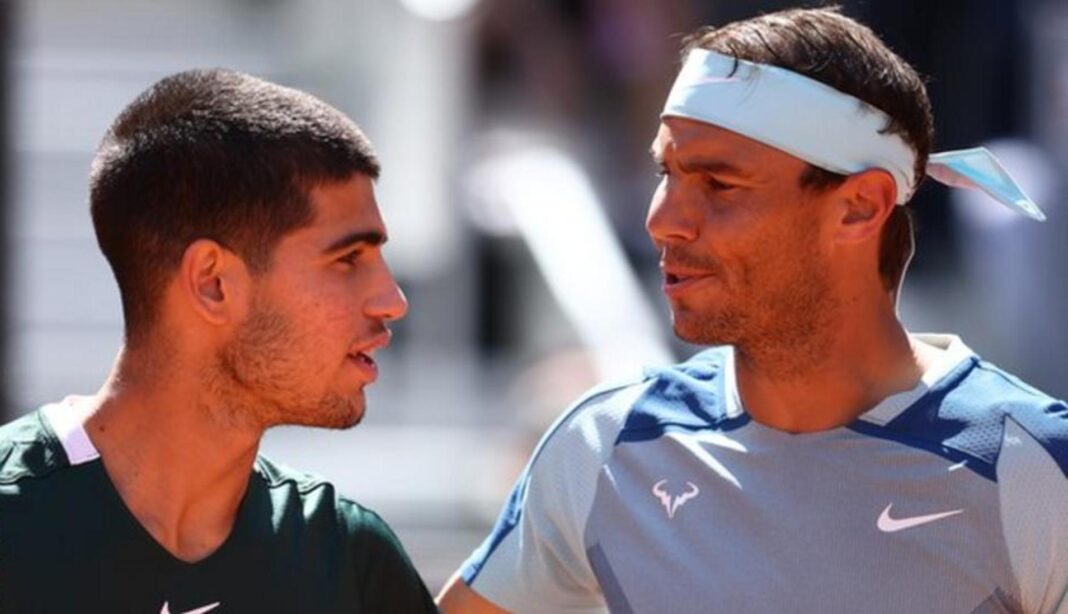 How a ‘piece of spaghetti’ became the newest tennis star

Carlos Alcaraz’s sharp rise in a stunning year has been down to his discipline and commitment on and off court. Particular focus has been put on improving shot selection and building a body that can cope with the physical demands placed upon the world’s best players.

“We worked a lot on his fitness because before, as I joke sometimes, he was like a piece of spaghetti,” Alcaraz’s Coach Juan Carlos Ferrero has said.

“We also work on all strokes and make special emphasis on his shot selection. He has a lot of talent and needs to order all the options he has while hitting.

“Being orderly off the court has been important to work on too.”

It felt apt that Carlos Alcaraz’s victory over Rafael Nadal at the Madrid Open – which seemed like a seminal moment in the passing of power – was watched by Spain’s King Felipe VI.

While Nadal is not prepared to abdicate from his “King of Clay” throne, Alcaraz’s first victory over one of his childhood idols – and subsequent lifting of the Madrid title – was the strongest sign yet the 19-year-old Spaniard is ready to rule the men’s game.

In this candid analysis that appeared on Tuesday (17), BBC Sport’s Jonathan Jurejko predicts Alcaraz may be the next King of Clay!

Alcaraz, long touted as a future Grand Slam champion after being identified as a potential superstar aged 11, has dominated the ATP Tour in recent weeks.

The next step is transferring this form into a Grand Slam and the best-of-five sets format, with the first opportunity coming at the French Open, which starts on Sunday (22).

If Alcaraz was to win at Roland Garros – where 35-year-old Nadal has been almost unbeatable over the past two decades – then the leap from tennis sensation to mainstream recognition would be complete.

Fellow players and pundits have tipped him to do just that, while bookmakers have made him one of the favourites alongside 13-time winner Nadal – who is trying to manage a foot injury – and defending champion Novak Djokovic.

So just who is this youngster once branded “a piece of spaghetti” who has got the tennis world salivating? And will he deliver?

Winning this month’s Madrid Open – the most prestigious tournament in his homeland Spain – was Alcaraz’s fourth title of 2022. No other man has won as many.

A tally of 28 match wins this year was also unparalleled going into the Italian Open, which Alcaraz skipped to preserve himself for Roland Garros.

“People are going to think that I’m one of the favourites to win Roland Garros,” Alcaraz said after he thrashed defending champion Alexander Zverev to win the Madrid title.

‘Start of the handover’

Djokovic thinks there is “no doubt” Alcaraz can lift the Coupe des Mousquetaires (the trophy awarded to the men’s singles winner at French Open) on 5 June, while Zverev labelled the teenager the “best player in the world right now”.

After losing to Alcaraz in Madrid, Nadal conceded it was the start of the “handover”.

“If it’s today or not, we will see it in the next months,” the 21-time Grand Slam champion added.

Alcaraz’s best performance at a Grand Slam so far has been reaching the US Open quarter-finals last year and many expect the sixth seed to match that run, if not better it, at Roland Garros.

Clay is the surface on which he grew up playing in Spain and four of his five Association of Tennis Professionals (ATP) titles have come on the red dirt.

Winning a major title this year is Alcaraz’s next goal and, to help him achieve it, he can count on guidance from a man who has been there and done it – Coach Juan Carlos Ferrero.

“The fact that I have lived all these situations makes me realise better about how he feels and how to manage those situations,” the Spanish former world No. 1 and 2003 French Open champion told BBC Sport.

A long way to go

“Winning a Grand Slam is really hard. It is competing against the best in their peaks in pretty long matches. We need to keep working, keep focus on our work, and let all the noise happening around not affect him.

“As I used to say to him: he hasn’t matched the achievements of anyone yet.”