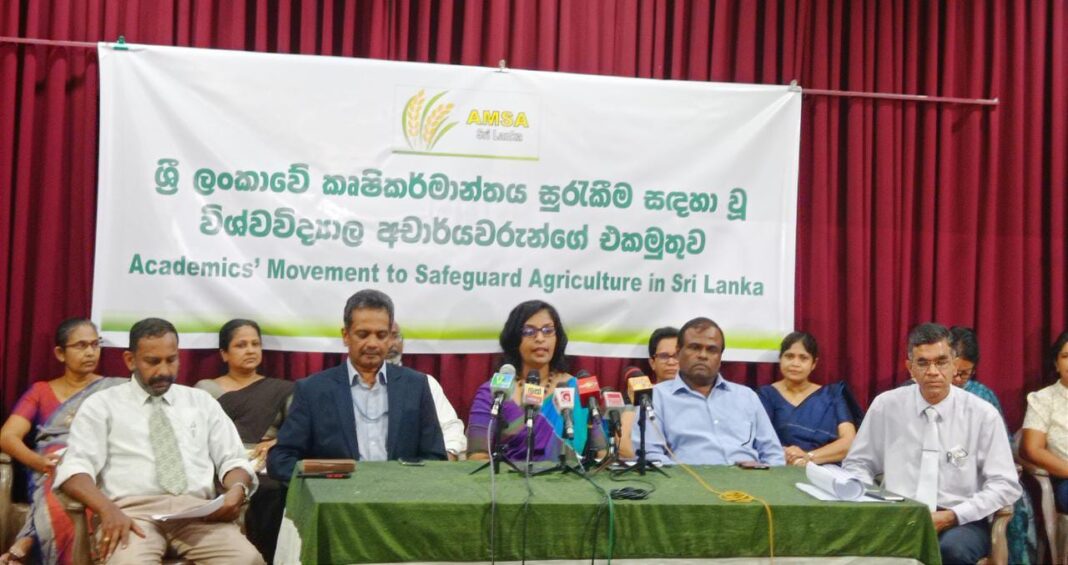 ECONOMYNEXT- Sri Lanka is facing its worst performing cultivation season in more than a decade during the ongoing Yala season and there is a possibility of a looming food crisis in the coming months,” a group of Agriculture experts have warned.

President Gotabaya Rajapaksa’s ban on chemical fertilizer a year ago is now taking the toll on the agricultural sector with the paddy production has plummeted nearly by 50 percent.

Rice is Sri Lanka’s staple food and nearly 80 percent of the 2.2 million Sri Lankan farmers cultivate paddy in 800,000 acres of land, the biggest by any crop.

“This season has not yet begun, but it is already finished. There is no hope for it,” K.K.I.U. Arunakumara, a crop science professor at University of Ruhunu told reporters on Wednesday (27) in Colombo representing Academics’ Movement to Safeguard Agriculture in Sri Lanka.

“If we cannot get enough seed paddy for next season at least, Sri Lanka will have to depend on imports even in 2023. We cannot see this crisis coming to an end.”

The fertilizer ban has led Sri Lanka to import rice from India, Pakistan, and Myanmar while China has agreed to grant 5,000 metric tons of rice.

Critics say the government’s objective of chemical fertilizer ban is lost because the island nation has to spend more dollars on imports while people are compelled to consume rice grown under agrochemicals in a foreign country instead of Sri Lanka.

The experts also said apart from rice,  yield of corn, a crop largely used for animal feed, went down by over 70 percent. while decline in tea production has led to a fall of 52 million US dollars in the first quarter due to fertilizer ban. They also said vegetable yield also had also gone down by 30 percent.

President Rajapaksa and his cabinet ministers were stubborn on organic fertilizer. The government first imported organic fertilizer from China, but the consignment was rejected because the authorities said the shipment contained harmful bacteria. Later it imported liquid Nitrogen fertilizer, but farmers complained that they do not prefer to use them due to bad odour.

Last week, the President said banning chemical fertilizer was a mistake and he would reverse the decision for the this Yala cultivation season.

Experts said a looming food shortage could be due to farmers temporarily abandoning Agriculture due to the unsustainable costs of the occupation.

“Fertilizer prices have gone up by seven folds, and farmers no longer receive subsidies. A 50kg of fertilizer was 6000 rupees in the past. Now it is over 45,000 rupees. Large commercial farms can cover the costs, but most farmers decided to reduce production area or temporarily stop agriculture,” Arunakumara said.

The initial ban on chemical fertilizer in April last year resulted in widespread protests by the farming community. After the ban is lifted, now fertilizer scarcity is haunting the farming  community hard.

Arunakumara stated that importers were finding it difficult to open letters of credit due to the forex crisis, and that the Russia Ukraine war, as well as China’s export ban on chemical fertilizer was also impacting the scarcity.

Experts noted that the lack of weedicides, pesticides and insecticides also had a huge impact on crops, especially on corn, which is highly affected by growth of weeds.

Professor Saman Dhamakeerthi from University of Peradeniya told Economy Next that the reduction of corn production could have adverse effects on the animal husbandry industry, particularly poultry farms, and that meat prices would also increase as a result.

Experts stated that Sri Lanka was self-sufficient in paddy since 2008, producing on average an excess of 800,000 metric tonnes of paddy per year, except for two years of extreme drought. In contrast, Sri Lanka had to import 650,000 kg of rice since the ban on chemical fertilizer, experts say. (Colombo/Apr27/2022)