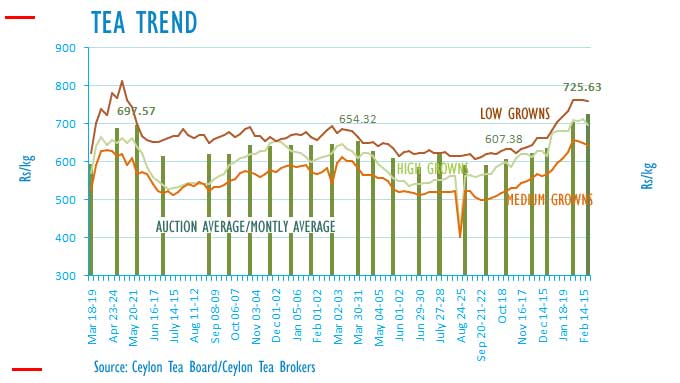 In January Russia was the second largest buyer of Ceylon Tea tea.

“Undoubtedly trading conditions are likely to be strained and additional war risk surcharges would further escalate the high logistics rates, which have already adversely impacted on tea prices,” Forbes and Walker, a Colombo-based brokerage said.

Amid sanctions the Russian Ruble had collapsed from around 77 before invasion to around 110 after creating affordability issues.

Russia’s central bank jacked up interest rates 20 percent to reduce credit and imposed exchange controls in a bid to stabilize the currency.

Global commodity prices had been soaring as the Federal Reserve printed money, weakening the dollar pushing up inflation to 40 year highs.

“Overall quality of teas from the Western planting districts showed a decline with fewer seasonal teas on offer,” Forbes and Walker said.

“Consequently, prices for the better Westerns declined by Rs. 20-30 per kg and more with the exception of the few available seasonal teas which continued to sell in keeping with quality.

“High and Medium Grown CTC teas continued to witness a bearish sentiment, whilst the Low Growns which have been selling at premium levels for a period of time declined fairly sharply by Rs. 30-60 per kg.”

Low Growns command the highest prices among Sri Lanka’s tea and has become the mainstay of the industry. The tea sector has also been hit by a fertilizer ban in 2021. (Colombo/Mar07/2022)