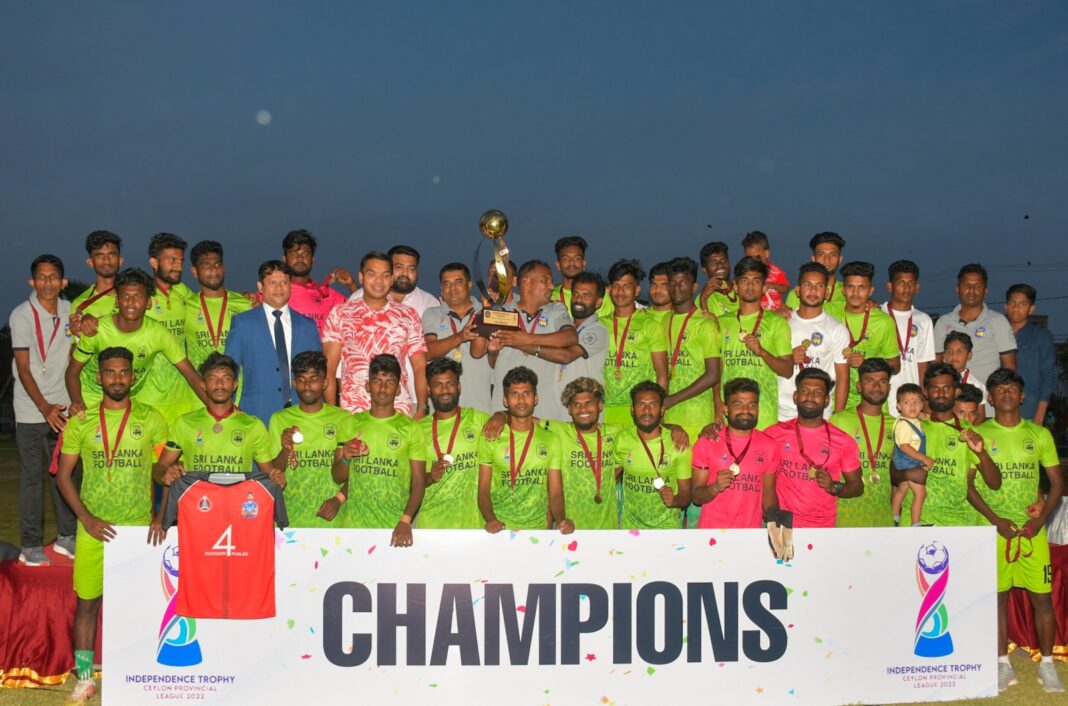 By Ravi Varma reporting from Duraiappah Stadium in Jaffna

The finals of the Ceylon Provincial League – Independence Trophy football, organised by the Football Federation of Sri Lanka (FFSL) in amalgamation with the Ministry of Youth and Sports, was worked out at a fully-packed Alfred Duraiappah Stadium here in Jaffna yesterday (5). Hosts Northern beat Southern 3-1 to clinch the coveted title.

The Provincial League featured nine teams as North-Western and North-Central fielded a combined team. Sabaragamuwa, Northern, Eastern, and Southern qualified for the semi-finals.

The FFSL remembered one of their stars, the late Duckson Puslas, with a minute silence before the kickoff yesterday. Puslas died in the Maldives on 26 February, aged 31.

After their semi-final victory against Eastern, Northern Province Captain Mariyathas Nitharsan stated:  “We all believe that we are here for Puslas. What he (Puslas) always loved was football. That’s why we are all here for.”

The skipper had delivered

As expected, the crowd gathered in big numbers to fill the stadium for the final on Saturday. The crowd looked to have kept a strong belief in their Captain and the team and they delivered in the end: As promised, they won the trophy and dedicated it to the late champion soccerite Duckson Puslas!

Previously in the National Sports Festival’s football finals too, Northern met Southern and won the title winning their first-ever gold medal for football at the prestigious national competition.

Soccer passion is still there in country

Saturday’s final may not be the best game of football but still it was a happy day for our home fans as the North won the inaugural inter-provincial title.

Special credit should go to the FFSL for having a national tournament of this magnitude which was played all across the island. Despite Sri Lanka struggling to move up the rankings at international level, this tournament has shown very clearly that the love and passion for the game of football is still there in the country.

Notably, Duraiappah Stadium in Jaffna and Weber Stadium in Batticaloa saw thousands of spectators gathering to witness the tournament matches this time.

We in the North earnestly hope that the remarkable success of this tournament will send the message to the Ministry of Youth and Sports and the Football Federation of Sri Lanka to think of further developing this great sport in one of its strongholds in the island – North and East – with more vigour and courage.