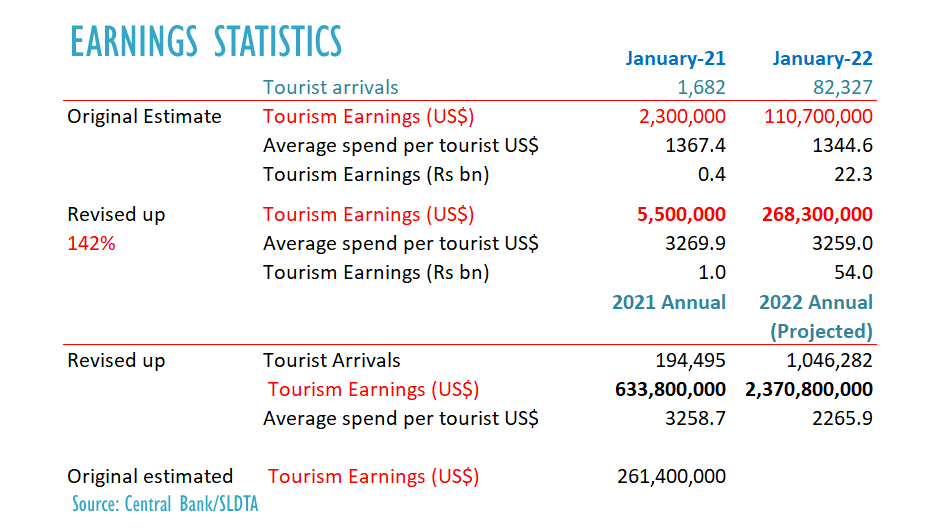 ECONOMYNEXT – Sri Lanka has revised up by 142 percent, tourism earnings estimates for January 2022 and also for the full year 2021, based on the average stay and spending from a survey by the tourism promotion office.

Tourism earnings for the full year 2021 were revised up to 633.8 million dollars from a earlier 261.4 million US dollars.

The earnings were revised “based on Sri Lanka Tourism Development Authority survey results on average stay period and average spending per day estimates for 2021,” the central bank said.

Tourism earnings for January 2022 which were originally listed at 110 million US dollars have been revised up to 268.3 million dollars.

The data may be further revised “revised based on Sri Lanka Tourism Development Authority survey results on average stay period and average spending per day estimates for 2022,” the central bank said.

Sri Lanka has blamed the country’s currency crisis on the fall of tourism receipts but analysts have warned that the tourism recovery cannot solve a monetary problem, relating to liquidity injections which has to be solved with higher interest rates.

From October Sri Lanka started using ‘reserves for imports’ (defend the peg for trade transactions), which force the central bank print more money to keep rates down (sterilize the intervention).

To break the cycle of sterilized interventions the rupee should be floated, analysts have said.

Higher tourism earnings will simply generate more imports as the recipients of the money, such as hotel worker, guides and taxi drivers, spend the profits.

There are also operating costs, such as fuel and electricity as well as some foods that are imported to service tourists.

Sri Lanka’s central bank depreciated the currency from 4.70 at the creation of the central bank to 182 to the US dollar in 2019, without Covid or loss of tourism revenues. (Colombo/Feb27/2022)