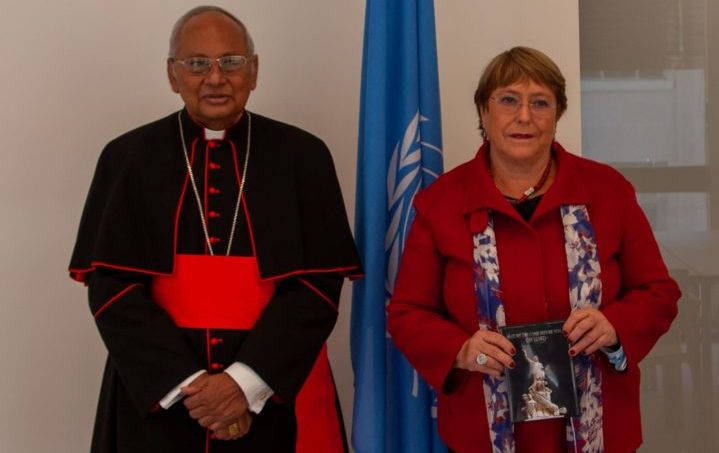 According to a statement from the Bishop’s House in Colombo, Cardinal Ranjith and Bachelet had discussed for roughly 45 minutes, among other matters, government investigations into the 2019 Easter Sunday bombings and what the Church alleges is delayed justice for the 269 victims and their families.

In September 2018, the Archbishop controversially criticised Western nations for “teaching” human rights to a country like Sri Lanka which he said has been religious for centuries. Human rights have become the latest religion of the Western world, he said speaking at a Sunday service.

However, in recent months, the religious leader has been harshly critical of the incumbent government for what he claims is its inability to find the masterminds of the Easter attack and had threatened to take the matter to the international community.

On Monday (28), he met Pope Francis in Rome where, according to the Bishop’s House, the Church’s grievances regarding the investigations were discussed. On February 15, Cardinal Ranjith said the church was working together with the Vatican on a secret course of action to help find justice for the victims of the 2019 Easter bombings.

“The plans cannot be revealed yet, but something is being organised,” the cardinal said, speaking to reporters on February 15. “If we cannot find a solution within the country, we will try going through international organisations.”

“If we do go international,” he added, “the government alone must take responsibility for that, because it is the government that has not paid an iota of attention to this. We cannot accept that.”

Sri Lanka’s Catholic Church recently marked 1,000 days since the bombings, with services held under the theme ‘’Let my cry come before you, Lord.’’  This Wednesday (02), Christians started lent season, at the end of which will fall the third Easter since the bombings. (Colombo/Mar03/2022)